How long will my roof last?
If you’re wondering how long your roof will last, we’ve got the answer for you! A properly installed and maintained asphalt shingle or tile roof should last between 25-35 years. So if you’re not sure when your roof was first constructed, it’s a good idea to have a roof inspection done to see how much life is left in it. But don’t worry – we can help you figure out how much time you’ve got left before you need to start planning for a new roof. Give us a call today for a free roof inspection!
Can I really extend the life of my roof?

Your roof is one of the most important parts of your home. It protects you from the elements and helps keep your home warm or cool, depending on the season. That’s why it’s important to take care of your roof and make sure it’s in good condition. Roofing materials will eventually deteriorate and erode, but with proper maintenance, you can extend the life of your roof by many years.

The mistake most homeowners make is to ignore small repairs as needed. A missing shingle takes little time and cost to fix; but ignoring that missing shingle may allow water to seep in, debris to accumulate and pry other shingles loose, or damage to affect the underlayment. Taking care of small problems can prevent the larger problems for decades.

What is the best thing I can do to ensure my roof lasts as long as possible?

Make sure your roof lasts as long as possible with periodic visual self-inspections and annual professional roof inspections! A small problem can become a major issue if not addressed, so it’s important to stay on top of things. Regular inspections allow you to make minor repairs before they become larger projects, and before a small leak becomes a major leak or a mold issue. Contact us today to schedule your annual inspection!

How can I know if I have a roof leak?

When it comes to roof leaks, it’s best to identify and address any damage before it becomes a bigger problem. Here are a few ways to identify water intrusion in your home. Check the wood framing for moisture damage, look at the insulation for signs of water-related damage, and check the ceilings and walls for staining or drips after major rain storms. If you see anything that looks questionable, don’t hesitate to call us!

There are pros and cons to both tile roofs and asphalt shingle roofs – but which is the right choice for you? We can help you weigh the options and decide what’s best for your home.

Tile roofs are known for their longevity – they can last up to 50 years or more! But new asphalt shingle products are nearly as durable, and they’re often easier to repair. So what should you consider when making your decision?

Price is a major factor: tile roofing materials tend to be more expensive than asphalt shingles. Weight is another consideration – tile roofs are heavier, it’s important for your home to have the proper structural reinforcement to safely support it. 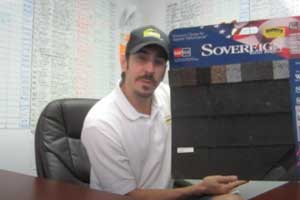 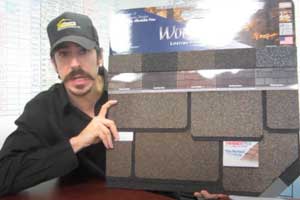 What are the best shingles for my home?

Hi folks, I’m Joe with Moore Construction Company. And I’m here to talk to you today about basic shingle upgrades. If you’re in the market for a new roof, a big question is: what kind of shingle? And if I do, what type of upgrade should I choose? So, at Moore Construction, we are GAF approved. So today, I’m only going to be talking about GAF brand shingles, and I’m going to start with the basic shingle, which is the three-tab. Basically, they have two different types. They have a 20 year and a 25 year three-tab. The only difference is the warranty and basically the thickness of the shingles themselves. Now in Texas, they don’t even really offer the 20 year shingle down here anymore. Only in a select few manufacturers. Now, with this shingle, you’re going to get a 60 mile per hour wind guarantee, and basically in a variety of different colors, depending on which region you have. Now, if you have this shingle, your next upgrade from here, you might want to consider would be the architectural shingle and, in GAF’s case.

It’s called the Timberline series. This is the Timberline lifetime HD shingle. There’s a few different shingles in the Timberline series. They have the basic natural shadow, the HD, and the ultra HD. One of the big differences is basically the shadow line. Now, compared to the three-tab, you can see it’s a total different look. It’s got a layer look and architectural look to it. So not only are you getting a better look, you’re getting a better wind rating of 80 mile per hour wind guarantee. And basically it’s a much heavier shingle. If you’re looking for something that has a little more rich in the color, I would recommend going with the HD series. It’s got a darker shadow line on it. Now, if you already have this shingle and you want something a little better and would like to upgrade from here, your next step would be the GAF armor shield II. It looks exactly the same. Just about the difference is that this is a class four impact resistant shingle. It’s basically hail-proof in most cases. Now this shingle is also a heavier shingle. It’s got a rubber like membrane. It gives you 130 mile per hour wind guarantee, but the best part about this shingle is it offers in most cases, insurance breaks on your home premiums. I’ve seen anywhere from 15 up to 30% off your insurance premiums, if the shingles install correctly. So your return on your investment on here is well worth it because you’ll make your money back from saving from the insurance premiums.

So those would be your basic shingle upgrades. If you’re looking for something a little more fancier, you’re gonna be looking more into designer series. My next video, I’ll go over some designer shingles. If you’re in the market for a new roof, check us out on the web at www.mooreconstructionco.com and sign up for a free roof inspection. That’s it folks. I’ll see you next time. Thank you.

Hi, folks. It’s Joe, again, with Moore Construction Company, your local Dallas roofing contractor. Today I’m here to talk to you a little bit about designer roofing shingles. And in the last video I made, I went over your basic shingle upgrades, which were your 25-year three-tab, your lifetime dimensional shingle, and even your impact-resistant shingle, which all are the most common shingles that you’ll see in your neighborhood. Let’s say you’re in the market and you want something a little more, you want something with some more curb appeal? Well, what you’re really looking for are designer shingles. So what I’ve done is I basically picked up my top three favorite designer shingles, and just wanted to go over with you today and show you what’s available out there on the market. Here at Moore Construction Company, we are certified with GAF products.

So what I’ll be choosing from would be GAS product line. And the first shingle I have for you today would be the Slate line. The slate line is probably one of the most common, designer shingles you might see. It’s basically designed to mimic, the look of slate. It’s got some really bold shadow lines. To give it that turn of the century look, it’s a great product. If you have a historical home, a Victorian home, or even like a cottage-style home, the shingle will really make your house pop. It does come with a 130 mile per hour wind guarantee, and it also comes with the stain guard, which protects you from mold that might grow on the shingles. You might have seen this one, but if you haven’t, it looks great when it comes out on the roof. Now that was my first one. My second pick of the designer shingles, would be your Woodland series.

This is the Woodland series by GAF, it’s a lifetime designer shingle as well. It’s basically designed, to look like wood shake. It’s basically got the hand-cut European-style, look at the fraction of the cost of getting a wood shake shingle. It’s got some really deep, deep shadow lines under here. It’s a really, really heavy shingle. And if you are interested in ever getting like a wood shake, Cedar shake shingle you’ll know that it’s a very expensive to get at that. So to go with something like this, you’re basically getting the look at a fraction of the cost. This one also has 130 mile per hour wind guarantee with stain guard, but it also comes with GAS advanced Protection technology, which is basically a high performance shingle, which minimizes the use of materials, and gives you a high protection rate as far as for wind and everything else.

That’s the Woodland series. And my last pick of the day, it’s something you’ve probably never seen or never heard of. It is pretty, fairly new on the market, maybe a year or two old. I’ve only seen one or two of these, actually up on a roof and basically it is the Monaco Lifetime designer shingle from GAF. It is designed to look like clay or concrete tile that you would see in Europe. You know, Florida, California, any place that has those really heavy clay tile shingles. So it gives it a lot of dimension, and is basically designed to give you an S shape curve look, when realistically it’s just a flat composition shingle.

It’s a fantastic shingle when you see it up there, it combines beauty, and the sophistication of tile with actually hyphening to deal and pay with, the actual tile roof itself. So these would are my top three favorite picks for the designer shingle series. If you’re in the market for a new roof, ask your contractor, for the designer shingles, if you like a free estimate from us, visit us at @mooreconstructionco.com, fill out the free web form, and we’ll be happy to come out and give you a free estimate on whatever shingle you would prefer. Thanks folks for your time and have a great day.